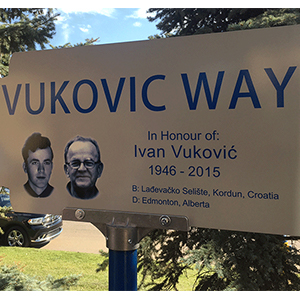 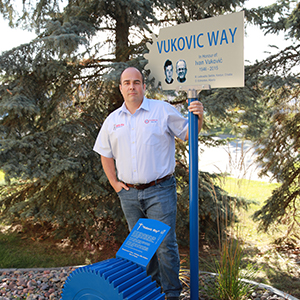 In 2015, the Naming Committee approved the honourary road name "Vuković Way", and in 2016, his son Bernard held an unveiling event.

Ivan Vukovic is the founder of the Edmonton based company NAMCO Machine and Gear Works which is renowned within the gear manufacturing industry across North America. For over 30 years, NAMCO has been a family operated business manufacturing custom gear boxes in house and was recognized as one of Canada’s 50 Best Managed Companies.

Ivan Vukovic emigrated from Croatia to Germany and lived there for nearly six years learning the machinist trade. In 1974, Ivan, his wife, and his daughter immigrated from Germany to Canada and settled in Edmonton. After working in various machine shops, Ivan Vukovic founded the Northern Alberta Machine Company, commonly known as NAMCO Machine and Gear Works, in February of 1976. NAMCO grew to accommodate the oilfield industry and in 1981 Ivan’s wife Kate joined the company’s business operations. In 1982, the newly built NAMCO building existed at 9145- 35 Avenue but as the company continued to grow, another new facility was built across the street in 1997 at 9168-35 Avenue. Upon purchasing more land at 9140-35 Avenue for future expansion, the Vukovic’s owned a majority of land on 35th Avenue between 91st and 93rd Street where their business became a North American powerhouse within the gearing industry. Beginning as a small, locally owned machine shop, NAMCO shifted from a service-based company to a product-based company supplying the Alberta’s mining, forestry, and oil and gas industries. In 2005, NAMCO branched out to form ALTA Rig Systems, an affiliate company that designs and manufactures drawworks for drilling rigs. In 2012, Ivan retired, and in February of 2013, he stepped down as the President of the company. Ivan’s son, Bernard took over as NAMCO’s President in 2013.

Renowned within the manufacturing industry, NACMO has been featured in the Edmonton Journal and Gear Solutions Magazine. In 2014, NAMCO was honoured as one of Canada’s 50 Best Managed Companies in part due to its retention of staff, many of which having worked with NAMCO for nearly twenty years. Ivan Vukovic is recognized as a leader in the industry and an exceptional businessman who provided over 75 employees with job security during times of economic downturn.

Ivan’s personal contributions outside of NAMCO included providing very significant donations to the Nativity of Mary Catholic Church and serving on the board of directors, as well as serving as a soccer coach for the Millwoods Community League and the Capital City Soccer Club during the 1980s. He supported hockey teams in the Millwoods neighbourhood by donating entire uniforms and supporting hockey tournaments. His most recently donation to a local charity was to the Make-A-Wish Foundation which helped fund a child’s dream of visiting Disneyland. Ivan contributed to an international cause when he purchased sea-crates that he filled with hand tools and other supplies and shipped them to Rwanda, Burundi, and the Congo. Ivan Vukovic passed away on September 17, 2015. 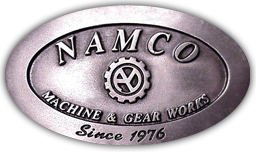